"Let food be thy medicine and medicine thy food." 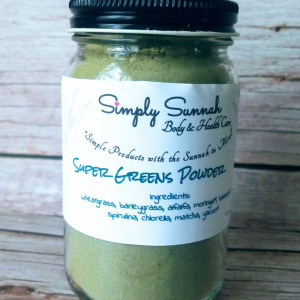 Are you having trouble getting in your healthy greens?  8 out of 10 people don’t eat enough veggies on a daily basis. That’s why we created a powerful blend of green superfoods to make it easier for you.

wheatgrass - A recent study shows that the chlorophyll, flavonoids, Vitamin A & E in wheatgrass benefit your immunity and help with oxidative stress.

barleygrass - This green superfood contains important B-vitamins as well as calcium, magnesium and iron. Even the ancient Greeks and Romans were eating it for its green power back in the day!

alfalfa - has been shown to lower cholesterol levels as well as reduce inflammation and oxidative damage caused by free radicals.

moringa - is rich in antioxidants as well as protein, potassium and calcium. It also contains 6 times the amount of iron than kale and provides all 9 essential amino acids. As far as health benefits go, research shows moringa fights inflammation, supports brain and cardiovascular health and reduces liver damage.

baobab - is a fruit from Africa’s “Tree of Life.” The antioxidant- and polyphenol-rich fruit has been used for centuries to treat many ailments. Thanks to its high vitamin C content (7-10 times more than oranges!) baobab can boost the immune system and increase iron absorption. Studies have also show the African superfruit can regulate blood sugar and improve digestion.

spirulina - is a blue-green mirco-algae and one of the most nutrient-dense foods available. The Aztecs, who referred to spirulina as “Tecuitlatl,” consumed it for energy and strength, which makes sense considering it’s a complete protein source.

chlorella - is a powerful micro-algae that contains more chlorophyll than any other plant. Because of that, chlorella has been shown to protect the body against radiation treatments. Research also shows that chlorella detoxifies heavy metals from the body and keeps them from being absorbed.

yacon root - comes from the Andean mountains of South America. Yacon has been used for nutrition as well as folk medicine for diabetes, weight control, and inflammation. Can be used as a sweetener also.  In terms of regulating blood sugar, yacon root prevents the body from absorbing simple sugars. This greatly helps out the liver, lending a hand in lowering fasting glucose rates.

Directions: Use 1/2 spoonful in smoothies, pastas, soups, curries and more. Add more or less depending on your taste.