Drinking tea made from loose herbs can be more affordable than taking capsules and, the body is able to assimilate tea easily.

Medicinal teas can also have the added benefit of hydration.

Water is also an excellent solvent for minerals, mucilage, and most medicinal constituents. 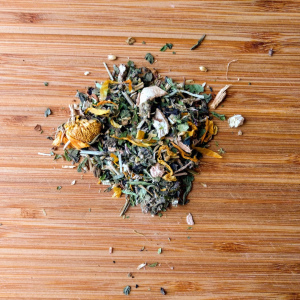 Yellow Dock: used to treat a variety of skin complaints but it is best known as a bitter alterative that promotes healthy digestion, cools hot, inflamed conditions and “alters” a stagnant or congested liver.

Red Clover: is commonly used as an alterative herb to support skin health, both through internal and external use, and is also considered a mild lymphatic.

Burdock Root: is an alterative herb.Its main affinity is with the skin and elimination through the skin. Burdock benefits also include noticeable effects on the urinary system and the liver.

Ginger: especially affects the respiratory system, digestive system, and circulatory system. It is a powerful anti-inflammatory shown to decrease pain for those with chronic inflammatory pain such as arthritis.
Yarrow: is broadly antimicrobial and antiseptic. It is also commonly used internally to move stagnant blood.