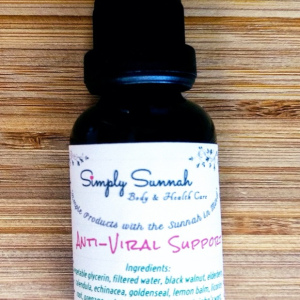 Viruses are responsible for a number of human pathogeneses including cancer. Several hard-to-cure diseases and complex syndromes including Alzheimer's disease, and type 1 diabetes, have been associated with viral infections. Moreover, due to increased global travel and rapid urbanization, epidemic outbreaks caused by emerging and re-emerging viruses represent a critical threat to public health, particularly when preventive vaccines and antiviral therapies are unavailable. Herbal medicines and purified natural products provide a rich resource for novel antiviral drug development. Identification of the antiviral mechanisms from these natural agents has shed light on where they interact with the viral life cycle, such as viral entry, replication, assembly, and release, as well as on the targeting of virus–host-specific interactions.

black walnut -  is known as an effective anti-viral and is used to fix warts, which are caused by viruses. Black walnut is an anti-fungus and has been used to fight herpes, cold sores, athlete’s foot, and Candida. It has been used as an antiseptic to combat illness like sexually transmitted infections and malaria and can be used to treat acne.

elderberry - has long been used to reduce the length and severity of flu symptoms and studies. Elderberry extract binds to the tiny spikes on a virus protein that are used to pierce and invade healthy cells and destroys them so that the virus is ineffective. Elderberry may also be effective against the herpes simplex virus and some HIV strains.

calendula -  has high amounts of flavonoids, which are plant-based antioxidants that protect cells from being damaged by free radicals; it also fights viruses, inflammation and bacteria.

goldenseal - has shown to inhibit viral replication and viral infection related inflammation. Goldenseal is a potent antimicrobial and has a long history of use as such. Goldenseal also assists with digestion and has an affinity for the respiratory system.

lemon balm - Test-tube research has shown that it has antiviral effects against avian influenza (bird flu), herpes viruses, HIV-1, and enterovirus 71, which can cause severe infections in infants and children.

licorice root -  has been used in traditional Chinese medicine and other natural practices for centuries.  Studies demonstrate that licorice root extract is effective against HIV, RSV, herpes viruses, and severe acute respiratory syndrome-related coronavirus (SARS-CoV), which causes a serious type of pneumonia.

oregano -  benefits are proving to be superior to some antibiotics, without the harmful side effects. That's because oregano contains two powerful compounds, carvacrol and thymol, that have powerful antibacterial and antifungal properties. It's the carvacrol  that reverses viral infections, as well as allergies, tumors, parasites and disease-causing inflammation. Doubting the power of this antiviral herb? Well, there are over 800 scientific studies that reference carvacrol and its amazing health benefits!

mint-  is known to have powerful antiviral qualities and commonly added to teas, extracts, and tinctures meant to naturally treat viral infections.

Its leaves and essential oils contain active components, including menthol and rosmarinic acid, which have antiviral and anti-inflammatory activity

reishi - has been shown to be anti-viral for HIV, HPV, herpes simplex 1 and 2, and influenza.

sassafras - has been used as an antiviral, a diuretic, and an antibacterial agent. It has also been said to thin the blood and alleviate the symptoms of hypertension, bronchitis and arthritis.

St. John's wort -  is more well-known for its ability to treat depression and neuralgia but it also has potent antiviral chemicals called hypercin and pseudohypericin that proactively fight off viruses that thrive by imitating existing cells. These viruses that masquerade as human cells include Herpes, HIV and Hepatitis C.

thyme - is a powerful anti-infectious agent that has been found in many studies to kill harmful bacteria and fungi in addition to viruses.

rose-  is an astringent that is used against inflammation and sore throats.  It has also been used for cold and flu relief.

turmeric -   is known to boost your immune response and help you better fight common viral diseases such as flu and colds. The anti-inflammatory properties of curcumin can play an important role in delaying many brain diseases such as Alzheimer’s and age-related reductions in blood pressure and heart rate.It is no wonder that people have been using turmeric for thousands of years to treat various diseases. While the main active ingredient ‘curcumin’ has an anti-inflammatory effect, it has also been shown to have a positive effect on the immune system and the body’s ability to ward off disease. It can spice up a good meal beautifully and also offer health benefits that will practically make it into your medicine cabinet. Its remedies include suppressing viruses that attack the body, from flu to hepatitis and herpes simplex.

Adults use 1ml once a day when needed with a small cup of water to help assist with viral prevention. Prolonged use not recommended.

May also be used topically for warts avoiding the eyes.