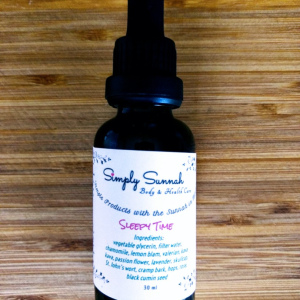 Stressed at work or at home? Can't sleep? Try this!

Lemon Balm - . Gamma-aminobutyric acid (GABA) is an inhibitory neurotransmitter within the central nervous system. Lemon balm naturally increases your levels of GABA. This has a positive effect on your overall mood, including reduced levels of anxiety which can thus help with sleep. Lemon balm also contains Rosmarinic acid, which has an antidepressant effect on the brain.

Skullcap -  is used when a person feels stressed, edgy and agitated. It helps with all kinds of nervous system agitation, including tics, twitches, spasms and seizures. Skullcap has a broad range of clinical application and is used to treat anxiety, depression, pre-menstrual syndrome, nerve pain, and delirium tremens.

It is also an excellent remedy for insomnia caused by stress. It is perfect herbal remedy for someone who can’t sleep because they feel tense and irritable. It helps relax the body and mind and to ease restless, interrupted sleep.

Chamomile - contains a chemical compound called Apigenin. It’s believed that its sedative effects may be linked to Apigenin binding to different receptors in the brain like benzodiazepine and GABA, which are known to decrease anxiety and initiate sleep.

Lavender - a Thai study saw that those who inhaled lavender oil said they had more energy and were more relaxed. It also found a reduction in blood pressure, heart rate and respiratory rate and that lavender may actually be able to alter brain waves and reduce stress.

In a small study done in an Indianapolis hospital on women, found that lavender aromatherapy had helped reduce anxiety and depression in women with postpartum depression. That’s a positive precursor to sleeping better for new moms – who need sleep more than anyone else on the planet!

Valerian - has been used as a medicinal herb since at least the time of ancient Greece and Rome. Hippocrates described its properties, and Galen later prescribed it as a remedy for insomnia. Valerian was also used as an early epilepsy remedy up until around the 19th century.

St. John's wort -has been shown to extend the final stage of non-REM sleep.

This herb is also believed to improve health issues that can disrupt sleep, such as depression and anxiety.

Rose - It exhibits antidepressant, antispasmodic, aphrodisiac, cleansing and hypnotic properties. The ethanolic, aqueous and chlorofomic extracts of the petals have a hypnotic effect. In in-vitro studies, it has shown effective results in inducing sleep comparable to diazepam which is a drug used to calm muscles and reduce anxiety. The ethyl acetate extracted from the rose petals has shown the best hypnotic effect. The flavonoids and anxiolytic compounds present in the flower induce sound sleep. In fact, it is an old wives tale that rose petals, if consumed before bedtime, can result in sweet dreams too.

Kava kava - Researchers at University of Erlangen-Nuremberg concluded that kava was an effective and safe treatment for sleep disturbances associated with anxiety disorders. Kava also increases the activity of GABA — which acts as the brake pedal for the brain, slowing down electrical activity enough to let you drift off to sleep.

Hops -  known to work also by modulating GABA activity. This effect is due to its bitter resins, particularly a component called 2-methyl-3-buten-2-ol. In addition, hops can also affect serotonin and melatonin, other key molecules in the sleep cycle regulation, further contributing to its sedative action.

Black Cumin Seed - According to experts when we get plentiful deep sleep our bodies produce a hormone called human growth hormone or HGH. This is referred to as the 'fountain of youth' by many as it has such profound anti-ageing benefits from improved energy levels, strengthening of the immune system to firm, smooth skin and thick shiny hair. Black seed oil acts as a precursor to deep sleep which in turn results in the body producing HGH or 'the fountain of youth.

Passion Flower - This plant has been extensively researched, with several clinical studies supporting its use in the treatment of insomnia and anxiety. Its properties are attributed to a compound called chrysin (a type of bioflavonoid), which binds to receptors in the brain. It acts in a similar fashion as GABA. Its efficacy has now been compared to that of the well-known anxiolytic drugs benzodiazepines, but with less adverse effects.

Dosage:
Adults use 1-2 ml one- two hours before sleep in a small cup of water.